Opera
Congratulations to Mária Adamcová on the Beautiful Anniversary 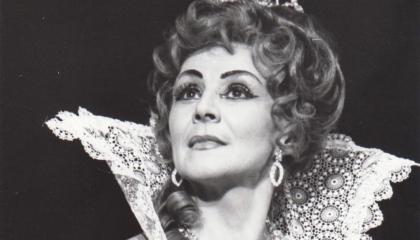 On Wednesday, August 26, the long-term soloist of the opera of the Košice State Theater, mezzo-soprano Mária Adamcová, will celebrate a beautiful jubilee of ninety years. The native of Važec started as a singer in SĽUK. She came to the opera ensemble in Košice in 1955 and until her retirement in 1991, she played dozens of opera and operetta characters. The Košice State Theater is joining a number of well-wishers who will wish Mrs. Maria all the best for her wonderful jubilee, especially good health and happiness.

As musicologist and opera publicist Vladimír Blaho wrote on the operaplus.cz portal five years ago, on the occasion of her jubilee, Mária Adamcová was the most important mezzo-soprano in the history of the State Theater in Košice. "She began to reach really important solo opera roles in the second half of the 1960s. Her preferences are difficult to determine because she sang almost everything in the ensemble. Verdi's demanding parties such as Azucena (1966 and 1981), Eboli (1967 and 1980), Amneris (1968, 1983) and Ulrika (1969). From the French opera, she played great seducers with demanding parts such as Saint-Saëns' s Dalila (1970), Carmen (1979) and Massenet 's Dulcinea from Don Quixote (1981) performed in Košice more than a decade before Bednárik' s production in Bratislava. She didn't have a huge vocal range, her mezzo-soprano seemed soft and in the higher positions she could easily handle, it sounded almost like a soprano. This allowed her to handle such dramatic characters as Wagner's Ortrude from Lohengrin. Her Russian repertoire was also rich: Tchaikovsky Olga from Eugene Onegin and Countess from the Queen of Spades, Borodin's Konchakovna or Mussorgsky's Marina Mniszech from Boris Godunov. Another repertoire area was the twentieth-century opera beginning with Janáček (Kabanicha in 1972 and Kostolníčka in 1977). Mother in Szokolay's Bloody Wedding (1967) or Vrabcová in Ferenczy's Unusual Humoresque. In addition to important roles, she also sang smaller or character roles (Háta from The Bartered Bride, Zimoňka in Krútňava, Serena from Gershwin's Opera, Suzuki from Madama Butterfly). Her creations did not know about performance fluctuations.” Blaho introduced the jubilee Mária Adamcová.