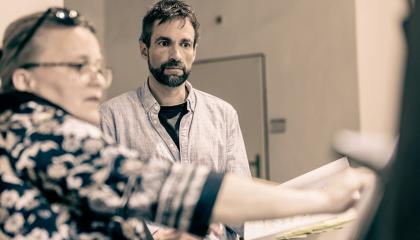 The opera Werther will be the third October premiere and the eight premiere of ŠDKE in current season 2021/2022. Its first presentation is planned for Friday, October 29, in the Historical Building ŠDKE.Opera Werther was composed by French composer Jules Massenet. It will be directed by German director Alexander Wiegold who is mostly established in Austria. Music was studied and prepared by a guest conductor Vinicius Kattah from Brazil.

Who wouldn’t remember required reading literate Goethe’s The Sorrows of Young Werther. The novel on a noble and passionate young man locked in sorrows of unfortunate love till he finally choses a voluntary death. The story shook German readers’ society in late 18th Century as a little earthquake. The book became an iconic work of the then young generation and influenced its feelings. Werther became a manifest of untamed sensitivity freeing from the shackles of societal conventions. He paid dearly for his inner freedom, however, by his loneliness in an established rational world of bourgeoise morality.

This very novel was used by the librettists Édouard Blau, Paul Milliet, and Georges Hartmann when writing libretto for Massenet’s opera. In his music, Massenet expressed ecstasy of love intoxication in a spellbinding way and unbearable sorrow at unfulfilled desire. One of Goethe’s young loves prefigured the leading female heroine - Charlotte. A woman of grace and wisdom gives up her love for Werther while remaining faithful to her husband. She is only ready to express her feelings when it is too late. The opera had an interesting fate, just like Werther himself in the novel. Massenet wrote it between 1885 - 1887 and offered it to Parisian opera house Opéra-Comique. The theatre however rejected the opera reasoning that the topic is too heavy and so the composer put it on the shelf and wrote different pieces. Following Manon’s success in Vienna, the Staatsoper’s managementasked him for another piece and so Massenet adapted Werther into German language and the piece, postponed for some time, was premiered in Vienna, February 16, 1892. The French original version was first time premiered in Geneva in December 1892. One month later, January 1893, the opera was finally premiered in Parisian theatre Opéra-Comique. The French original will be also presented in Košice.

Werther’s premiere in Košice was originally to be held in May 2020 and it was to be directed by Czech director Linda Keprtová. The corona virus pandemic and health condition of the director postponed the premiere. The director eventually withdrew from the project and the opera house engaged director Alexander Wiegold. Though born in Münster, Germany, he has most established in Burgtheater in Vienna.

"Werther is a sensitive rebel, restless seeker of the sense of life. He radically challenges the world which is based on economic calculation and understands love as creative, liberating, and fulfilment bringing driver. “Pourqoui me réveiller?” – “Why you awaken me?”he sings in his immortal aria: our imagination allows us to create much better world than the one enabled to us by our limited view of nature. Werther’s dream-like images and visions disrupt aligned world and turn beloved Charlotte’s life upside down. The characters, especially Charlotte, fight less against societal conventions, they fight their own desires and fears of the abyss of passion. Werther’s unfulfilled desire grows into a nightmare, insanity, he eventually couldn’t escape," says director Alexander Wiegold.

The new Wertherbrings along an interesting comeback of the singers who have grown-up in Košice. Guest tenors Peter Berger and Michal Lehotský share the leading role Werther. Solo parts are once again sung by a world-known Russian mezzosoprano Elena Maximova who double casts Charlotte along with local soloists Myroslava Havryliuk and Viera Kállayová. Sophie is portrayed by guest sopranos Aneta Hollá and Veronika Bilová, a recent graduate from VŠMU. Albert is interpreted by local Marián Lukáč and baryton Jiří Rajniš, guest singer from the Czech Republic, who had previously starred in Košice in a small project Manželstvo v piesňach, which was prepared by the theatre for online streaming during the lockdown. Other characters are portrayed by the local soloists Michal Onufer, Marek Gurbaľ, Maksym Kutsenko, Anton Baculík, Martin Kovács, László Havasi, Jakub Benčo, and Silvia Ondočko.