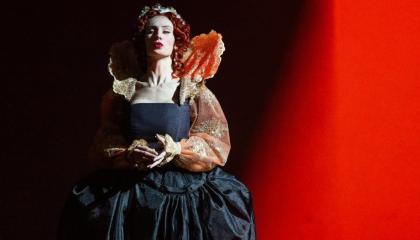 The opera was scheduled to premiere in November 2020 with the internationally acclaimed opera diva Edita Gruberova in the title role of Elisabetta, in a farewell performance after her notable career spanning five decades. It was Ms. Gruberova who played a significant role in the renaissance of Donizetti´s oeuvre in recent decades. Due to the coronavirus pandemic, the performance had to be cancelled and the production was rescheduled.

Roberto Devereux is Donizetti´s third opera inspired by the Tudor period and the phenomenon of the English royal family. The opera depicts the love triangle of Queen Elisabeth I., Roberto Devereux and Elisabeth´s rival Sarah, Duchess of Nottingham. “One of the most famous protagonists of Donizetti´s soprano roles, Ms. Gruberova, sees this work as the drama of a woman in love who has been betrayed. And when a cheated woman has power to decide upon life and death, a real drama unravels. The desire for revenge and the struggle with her own conscience drive her to death –these are the elements of a drama we wanted to put on stage”, says the director of the opera ensemble Roland Khern Toth.

“In spite of the fact that the opera is set in the past, there are parallels to the times we live in. The opera depicts the end of Elisabeth´s rule, the end of the Golden Age, which evoke feelings of a doom, of apocalypse. I think that mankind is experiencing this kind of feeling today. It is as if something was coming to an end and we don´t know what will come next”, Anton Korenci, stage director of the piece and director of the drama company of the State Theatre.

Musical director Peter Valentovič has frequently worked together with Edita Gruberova. “It was Edita Gruberova who made the opera famous around the world. All roles, not just the soprano part, but also the mezzosoprano and the baritone parts, are extremely demanding and the opera is not staged often. The orchestra has more of an accompanying role. Roberto Devereux is extremely difficult especially for the singers. As for the orchestra, Donizetti creates beautiful colours with the combinations of instruments. I trust that we will create a wonderful new piece”, adds Valentovic.

The cast has brought together soloists of the State Theatre opera company alongside acclaimed guest singers. The title role is played by the rising star of Slovak opera, Eva Bödörová. “The title role of Queen Elisabeth is a new and wonderful challenge for me. It is also a great honour to step in for Ms. Gruberova. She is an icon and an exceptional artist”, adds Bödörova. “The part is extremely difficult from the very beginning, with a lot of coloraturas. My character seems to have two distinct personalities. She is a queen. But she is also a woman. I feel the emotional outbursts of these two Elisabettas at the same time. Donizetti´s music allows me to reveal the deepest feelings of love, passion and regret. Emotions are flowing through Donizetti´s melodies”, says the charismatic Ms. Bödörová.

Sara, the Duchess of Nottingham, is sung by the internationally acclaimed Russian mezzosoprano Elena Maximova, whose brilliant voice has been heard in the most famous opera houses from Royal Opera Covent Garden to Milan´s La Scala. “I had a contract to sing Sara in Sydney, but then the pandemic came and the opera houses had to close. So the Košice production is my role debut. This is a bel canto role and bel canto is difficult – my final aria is one of the most difficult bel canto arias ever. Especially for those without a good technique. If you have a good technique, you can survive”, says Maximova with a smile.

Roberto Devereux is a house debut from the tenor Davide Astorga, based in Spain. The native of Costa Rica is a graduate of the Placido Domingo Academy in Paula de les Arts Reina Sofia in Valencia. “To sing Roberto Devereux is very difficult, but enriching. I am singing the role for the first time here in Košice, although I was scheduled to sing the role in Teatro Massima in Palermo. Due to the pandemic, the production is rescheduled for next year”, says Astorga.

The soloist of the State Theatre Košice Marián Lukáč sings the role of the Duke of Nottingam. “I like singing Donizetti, it is a pity his operas are not staged more frequently. The role of the disappointed, cheated husband allows me to display a range of emotions, says Mr. Lukáč.

The annual European Opera Days were initiated by the Opera Europa organization in 2007. During European Opera Days, the opera companies across Europe open their doors to the general public, with opera house tours, open rehearsals, talks and special events. Due to the pandemic, this year´s events are taking place online.

“The online premiere of the new production follows the rehearsal process that was finished in Mid-December. “This is the version of the opera the visitors will be able to see live in the opera house in the premiere scheduled for September. Filming the performance has enabled us to capture the opera from different angles – for viewers watching online”, concludes the director of the State Theatre Košice opera company Roland Khern Tóth.