Opera
Decades with the Theater of Jubilee Viera Hronská 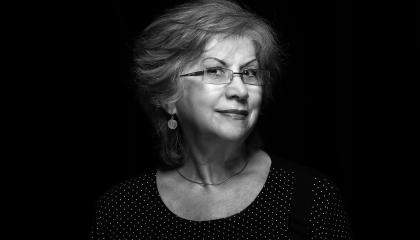 The State Theater in Košice is joining the well-wishers who wished all the best to beautiful life jubilee of longtime opera soloist Viera Hronská on Friday, July 24, 2020. She joined the stage of the State Theater in Košice as a member of the ensemble almost sixty years ago and she still works in the backstage as the opera stage designer. With breaks and a few short times in opera in Banská Bystrica or Prešov, she spent her whole professional life in Košice theater. In 2009, she was awarded the Prize of the Košice Mayor and in 2015, she was awarded the Literary Fund Prize for her life work. In the interview, she revealed how theater was her life from childhood, which roles are the closest to her but also how the theater is different from when she started.

You were born less than three weeks after the “birth” of the State Theater in Košice. Was that a Sign of Fate that had determined the future in your crib?

We are two “elder ladies”. And with those Fates, it might be true. I remember that since I was four or five years old, I never wanted to be anything else but singer. From early childhood, I was going to all operas, operettas but also ballets and plays with my mom. We can say that the theater was my life.

So, was it your mom who led you to opera and music?

It was rather natural thing in our case that we lived culturally and we were simply close to opera and music. But my mom supported me. My dad was always asking us: “Are you going to this or that opera again? You have seen it like ten times already.”

It is almost unbelievable but you have joined the opera ensemble of the State Theater in Košice in 1963. Do you still remember the first performance you did?

I wanted to be in opera very much. Dad wanted me to have something else in my hands, I passed my high school finals from chemistry but I failed the entrance exams for university on purpose so they would not accept me. I sang my way to the opera ensemble where I got my engagement. Simply said, the theater had and has a different smell for me that anything else! The first opera, in which I performed, was, coincidentally, Nabucco in which I repeatedly sang the role of Fenena.

What were your first feelings on the stage?

I cannot tell exactly. I was taking private classes with Mr. Boháček who was a voice coach in the theater so I always was around the theater or directly inside. Of course, it was different on the stage. When a person goes up there, it is a strange excitement! And meanwhile, as I was already a member of the ensemble, I went to the Conservatorium and Academy of Performing Arts.

In 1985, you joined the soloist ensemble. As a soloist, you still worked in the Košice theater a few years ago. Do you know how many opera or operetta roles did you do and which stayed in your memory the most?

I don’t know the number of roles but there were probably three roles that are the closest to me: Azucena in the Troubadour, Amneris in Aida and Ježibaba (the witch) in Rusalka. However, I portrayed all the roles I was given with enthusiasm and the best I could.

In almost six decades in the theater, you have met many people, singers, conductors, musicians. Was there, among them, someone who had the most significant influence on you and your career?

I admired conductors Ladislav Holoubek or Boris Velat, especially because they repeated everything over and over again and dealt with the whole ensemble. It was different then. There were much more rehearsals than today and even in small spaces between performances, there were ensemble rehearsals! I loved collaboration with conductor Štefan Gajdoš, who did operetta and was a brilliant pianist, musician and a person.

How has theater changes in those years, maybe, what is it missing today, in comparison to the past or the other way round, what is completely different than in previous periods?

I have to say it has changed a lot. There used to be more life, also in Prešov, in Banská Bystrica and here in Košice as well. The performance has to subside in a person. Not like, the curtain falls and you’re elsewhere! I hate that until today. Back then, we always went to get coffee or something together. We also have a little theater place on Šrobárova street (Alžbetina street today) We talked about the performance, talked to each other and it was simply different atmosphere! We were like one family. Now, I have felt for years that everyone is out there for themselves. Simply said, the times have changed for sure, people do not live only for theater.

I remember my first Azucena. I was still in the ensemble. I learned it on my own, I stood in the portal during all performances and watched. And when the soloist got sick once, I joined the performance without an orchestra rehearsal. You know, I was on the verge of a heart attack but right after that, I was double casted for the role.

Although you left for a singers’ retirement, you did not resist a calling of the theater “drug” and you still work in the background as the scene manager. How did you see the stage managers back when you were on stage? Is the view different now after the experiences from the recent years?

You know, even as a singer, I mixed with everything. I was an opera secretary, assistant director. And I have to say that already as the choir member and then later as a soloist, I often sat close to the stage manager. I was very interested in that job Before, she had a separate booth, not like now that everyone, coming on the stage bumps into my chair. And maybe that is why I like to do it, because I know what it takes. Especially in the opera where the stage manager is responsible for everything - soloists, choir, orchestra, lights, turntables, sounds... And the music “will not wait”! It cannot simply pause.

I would like to add that for more than thirty years, I was holding education concerts for children and young people and for years, I taught acting at the singing department of the conservatory. Until today, I’m very happy to advise young singers with creation of their role if they are interested in that.

Too bad I do not have my reduction here. In there, I have a note for everything, every light change marked with color based on music, colorful bookmarks with changes of the scene, with using the turntables, change of moves, using the sounds. I prepare everything during the rehearsals so I knew who is supposed to be ready and when and even then I change it often when I see that I need to call someone earlier or later so they would conveniently make it and so on.

A cliché says that theater is an alive organism and Every performance is different. It definitely brings tense or funny situations in the backstage...

We have gone through dramatic moments recently with one of our Othello reprises when our scene started to literally break when turning it around. We had no idea what was happening, I had to stop the turntables really fast which was not so easy because stopping those takes some time, we had to send the soloists and the choir up and away, using other paths so there were no injuries and in the end, we finished the performance in front of the fallen curtain. But I still remember another drama from times when I was still a part of the choir. It was The Blue Rose and four of us, girls, had a performance on the stage. The stage manager called for us and we were having so much fun that we did not hear. And when he ran down there, she told us she is giving us a report because we were supposed be on stage and we were not. And at that very moment, a piece of scene fell down on the exact place we were supposed to be standing on. “I am not giving you a report and thank God you missed it.” This is that fate!

And how about some cheerful or funny ones that the soloists or choir members definitely prepare for you?

There is a lot of such situations and those are funny when they happen. Jozef Konder was very good at that. I remember when he played Jeník in The Bartered Bride, the principal did not come to the performance. He dressed up, got on the stage as the principal and we almost died laughing. Various situations arise and when some of those happen, neither stage manager, nor anyone else can do anything about them.

What would Viera Hronská wish to the jubilee to herself but also to the State Theater?

To myself, definitely health so I could do what I do with true love. And to the theater, mainly the audience so it would prosper, live, and did so also inside, in its team. Maybe I might seem hysteric to some people but I for one am sorry when people sit anywhere in their costumes, do not save them because they do not take them as theirs but “only” as the theater’s. I simply want everything to be right in the theater, on the stage! That is the main thing!

When I still performed and some new colleague came that was double casted with me, I taught her exactly what I was doing. My colleagues were sometimes wondering why I was teaching her everything since she was my competition. I only had one answer to that: “I will not sing better or worse, just the way I can and so will she.” I simply wish that everything is the way it should be, in relationships between people as well as the performances.