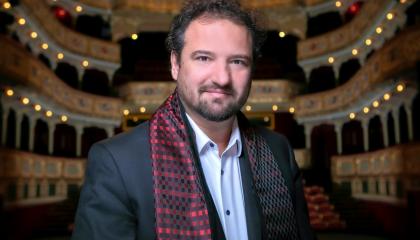 Peter Valentovič becomes, from the new season, a new chief-conductor of ŠDKE Opera Company. He has been guesting in Košice since 2013. In the previous season, he was choirmaster, along with the choir he prepared operetta Duchess of Chicago (22 and 25 September) and opera Roberto Devereux (30 September and 1 October), and several smaller projects that were presented online during the pandemic.

In September, you have successfully premiered operettaDuchess of Chicago.OperaRoberto Devereuxwill be premiered soon, in several hours. How difficult it is for a chief-conductor and opera company to manage such a fast work pace?

During the pandemic we were allowed to be in the opera and rehearse, we just couldn’t perform. It is quite unusual to do two different premieres in two weeks in a row. But as I said, we rehearsed it before, and 'Chicago'already had two public dress rehearsals before. So, it was manageable.

Košiceadaptation of Duchess of Chicago received more than favourable response yet during its July preview performance. Moreover, the show was even praised by Emmerich Kálmán’s daughter. In your opinion, what is unique about the operetta and/or its Košice adaptation?

The most remarkable feature of the operetta are two different musical genres fighting with each other. American Charleston, Foxtrot, Slow Fox fighting with Hungarian Csardas and old good times nostalgic melodies. Something new, modern comes to Europe. Kálmán got sheet music sent from America, he studied them, he has never been to America before. His music motives are absolutely catchy and perfectly composed. Košice adaptation is excellent. And as it often happens in operetta, it is adapted to the present day. It also contains some political satire and satire regarding current covid pandemic.

It is also interesting, that Kálmán wrote jazz operetta few years before he had the chance to get into contact with this music in person in America. In his operetta, he incorporated Jazz, with which he got into contact only indirectly. He must have been a genius composer?

Yes, that is absolutely ingenious. Kálmán was a genius composer!

Let’s move further. The opera will soon do the premiere of one of the most beautiful bel canto operas, Donizetti’s Roberto Devereux. Košice premiere of the opera was, originally, meant to be an official career farewell of the world opera diva Edita Gruberová, everything is different though. As a chief-conductor who perfectly knows the opera, what is best about the opera?

I talked with Mrs. Gruberová on the phone and she expressed great sadness that this can’t actually be done, that the pandemic interfered and changed the situation. It’s great pity. For sure, the best is Elizabeth’s final scene when she goes mad. It is a musical gem and it is very challenging for the soprano. The whole opera includes beautiful melodies, and dramaturgy is well structured as well.

Though Edita Gruberová eventually does not appear as English Queen Elizabeth in Košice, I suppose that she followed the creation of the adaptation. Did you talk to her during rehearsals, did she in a way assisted 'from the backstage' to create the adaptation?

We made a video, when theatres were closed for public, and I sent it to her. She saw it and liked the adaptation and the singers as well.

Bel canto is a style that is challenging especially for the singers. What is difficult about it for the chief-conductor and/or orchestra?

It places demands on singers’ art and orchestra that accompanies them. In arias, orchestrais purely accompanying. We need to know the text perfectly and know what the singer is doing on stage, where singers slow down or accelerate, what kind of dynamics follows. In Donizetti’s times, they had different musical instruments compared to the instruments we have today, and so we need to interfere into dynamics significantly. For example: sheet music writes fortissimo, except for few moments where dramaturgy so requires, but we need to balance the music well between the orchestra and the stage. But the most challenging about bel canto is for sure accompanying of singers, as this style is very transparent, you can hear everything. It may seem that orchestral accompaniment of bel canto is very easy, but this is the very interesting point about it. We may see this well in Vincenzo Bellini’s operas.

Online premiere of the opera’s Košice adaption in May brought success. Will the audience have the chance to see similar performance as the one that was streamed online?

Of course, it will be the same, just with the presence of the audience.

Starting from the new season, you have become the chief-conductor of Košice Opera Company, at the same time you remain the post of choirmaster. How would you evaluate the choir and the orchestra of Košice Opera?

I really like to work here. I’ve known the choir and the orchestra for a longer time. I’ve regularly guested here since 2013. The Opera Company has a great potential.