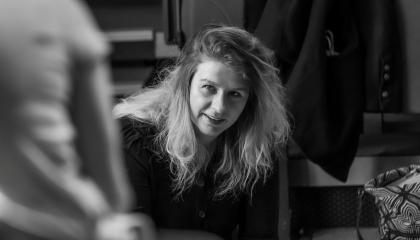 The first live premiere and the first viewers in our auditorium this year. The drama company of the State Theatre Košice is about to release on Friday, May, 14 at 06.00 p.m., at the Small Scene of ŠDKE, new staging of the novel BEWARE OF PITY by Austrian writer Stefan Zweig. Júlia Rázusová, who did direction and dramatization of the work, describes the finest nuances of Zweig’s style and the world we shall see on stage.

When did your inclination towards Stefan Zweig begin? His literary world, is there something special about it? Simply, why do you like him?

I see the complexity of Zweig’s work. I found his books in our family library. Already then, we had 'Impatience of the Heart', translation by Perla Bžochová. I gradually discovered his essays, biographies, and novels. It all ended up with the book The World of Yesterday. I often come back to it. In the book, Zweig describes his own fate and attitude to society. The title itself, World of Yesterday, communicates with the world of today. He answers to me, just as anybody else in the 21st century, many historical contexts that reflect today. E. g. when we speak about the relation of society and culture Zweig pinpoints an interesting observation that even traditional guardians and protectors of culture stopped practicing arts. He means imperial court, aristocracy. He gives example, he says that while Maria Theresa gave her daughters musical education with Gluck, Franz Joseph allegedly did not touch a book for decades. Art started to be neglected, far from being supported. It was the middle class – bourgeois – who, in fact, financed arts from their own funds to maintain the quality level of philharmonic concerts, their living costs. Here, I can see a parallel with today, who supports arts and artists. In this book, Zweig deals with the rise of nationalism and Hitler who totally twisted values of our society. Europe as such was paralysed by Nazism which came to power.

Zweig calls polarised society in the first decade of the 20th century, war against all. Individual freedom ceases to exist in the new Europe. He himself, as a Jew, experiences and describes an immense tragedy. His work was burnt, pinned on street poles... and so he ended up his fate and committed suicide, because he did not want to live in the world where books are burnt, and people do not value culture that has been created over the centuries. Despite the tragedy and depression, he reveals vast power of inner freedom nobody can take, in principle. The author enriches my mind enormously with his quotes such as: “The happiness of our life depends upon the quality of our thoughts.” He points at ratio with which our time has a problem, as we are victims to our emotions and, in a way, we are no longer interested in facts. Zweig says that nothing astonishes men as much as common sense and plain dealing.

Beware of Pity is precise insight into very sensitive topics. With the historical context on the background, strange love story unfolds until we see that it is a kind of camouflage... What in Beware of Pity touched your heart? What could touch the hearts of others?

Beware of Pity is unique in the context of Zweigian work. It received controversial reactions. Some read it as a love story, a novel. Those who prefer Zweig as a non-fiction author, detached author, the novel falls short of their expectations. I love to see stories on stage. A story is something people need to tell and share from the Neanderthals up to contemporary man. And I see theatrical potential in this story.

Within the story of a lame girl, who unhappily falls in love with a cavalry officer, Zweig uncovers thoughts on pity. Zweig brings psychological insight into pity; he treats it as an emotion or motivation that makes people act. Managing emotions is a strong topic. Zweig distinguishes creative pity and destructive pity. Any of us know this phenomenon. We do not know whether we do things by compassion or simply because we want it. The borderline of our will, our decision-making is affected by the fact whether we do things because of the others, or we are afraid of the reaction of the others. Or we fail to do something exactly for we think we are not strong enough to do that. Or we act, paradoxically, convinced that we act right and yet we should go against our own will. And I see space for this on stage. To see ourselves while making these simple decisions we do in our lives. Psychologically dig into where is the essence of decision-making.

Sometimes when we want to be good, we are unable to tell others clearly things and information that may hurt them. It is then followed by white lies and half-truths we often use. It is also ethical issue of our society. In Christianity it is linked to people’s morals, behaviour. And so, we get to sacrifice, we face. The main hero asks himself whether he is able sacrifice his life for a close one, for certain woman whom he can rescue somehow? Those boundaries of egoism are confronted, in Zweigian sophisticated way, with the character of Doctor Condor who lives with blind wife. Society/outer world sees his decision as an act of an unreasonable pity. As he was unable to treat her, he rescued her in this way. He refuses loving sacrifice. Interesting reflections of pity. In this moment, Zweig brings the topic of individualism and relation to responsibility of our generation in confrontation with the idea of humanism and morals of the last century.

You did both, direction and dramatization of the drama. How do you feel in this position? What was most difficult when transferring things from the novel to the drama?

The dramatization itself was difficult to me. I feel better as a director, rather than dramatist. But when I find myself in this position, I try to transfer that what I find interesting for stage. I however had to make decision regarding the scope of the work. I decided not to transfer some motives, situations that could not be done. Zweig intentionally narrates the story before 1938, but the plot is set in 1913. Unfortunately, I did not manage to insert this time framework on stage. In terms of the literary work, however, this plays an important role. When making adaptation for stage, we tell the story from perspective of the century in which we live. Had Toni dressed the uniform of a man of 1913, would it ft? Would such man have similar motivations, same thinking? A present-day man, how would he react to the deliberations and mad intentions of the WWI? The second important aspect I wanted to maintain in the drama is Toni’s internal feelings, which are diametrically opposed to his outward action. Include in the drama Toni’s inner world, show his inner conflict. The feeing when you think something else, you know something else, or you wish for something completely different and externally you are either paralyzed by the situation itself or you remain silent. This is another attractive moment for dramatization.

Your directing style is clearly recognizable. An actor is rarely static in your drama. Here, I can see some contrast, as the main character Edith is physically disabled. The heroine has no capacity to move, and she is to be portrayed by the director for whom physical movement is the driving force of the drama?

When reading the book most of us have some visualisations and images. I was fascinated by Edith’s energy. Zweig expressed that energy by means of her speech. When Zweig’s characters speak, they are unstoppable while others wait for their chance. Edith is uncompromising in this. Her energy brought her desire to walk. Toni, while twisting some facts, brings hope for her and possibility to trust somebody at least for once. Edith believes that lies and her hard-won trust is eventually a lie. Due to Edith’s desire to recover for a man, I thought that her character moves the most. This crippled girl wishes to walk. Her father has funds and is doing his best to bring the best medical treatment for her. He does maximum he can, and so I thought that Kekesfalva’s house is maximally adapted to Edith’s movement. The family denies her handicap, no crutches and wheelchairs. And as Edith wished to be a dancer, dance bars will be placed in the house. To me, contrasts are interesting. For example: mentioned contrast between Toni’s inner world and his outer behaviour. I try to find such contrast between text and physical movement. Our body often reveals what we feel inside and what we try to mask. My directing style includes these principles. I do not want to forcefully boost the story. I want to manifest paralysis on stage by means Edith’s effort to overcome it.

You are not always fixed to the same creative team, not that type of director. On the contrary, you like new cooperations. How do you pick your team? How did you do it in this drama?

When I was putting together the production team, I intuitively considered important topics and my visualisation of the novel. I work with Diana Strauszová, we are well-coordinated, we do theatre dramas and low-budget productions. Mostly abstract scenes allow me to create images through actors’ physical movement. The first time we cooperate with Laura Štorcelová. She also does photography, styling, and visual arts. More styled projects. When I saw her minimalistic photos I thought of Edith, and sterility, and detail. I have also previously worked with Jonatán Pastirčák. I was thinking, how would present-day Toni look like and Edith’s wish to dance brought me to Jonatán Pastirčák’s different identities e. g. his Isama Zing, Pjoni, or his works for theatre. The cooperation with Andrej Petrovič is a precious discovery. To be honest, this is my first cooperation in the area of physical movement. My directing style is characteristic for actors’ physicality, it is quite intimate to me. And so, at the beginning I found it difficult to let Andrej in. But with Andrej it went well from the first meeting. I like his theatrical thinking, the way he stepped into our mise-en scenes where we altogether create images.

This is your fourth cooperation with the State Theatre Košice. Who is Afraid of Virginia Woolf, Reunification of Koreas, Borodáč or Three Sisters, and now Beware of Pity. How is it like to come back to the same ensemble?

It may sound as cliché, but I must confirm it. It makes sense to return to an ensemble e. g. two years later, as we know our expectations, we move forward, we reach our limits, but still we can set new challenges. No need to come back-to-basics. I like to offer opportunities for local actors in an institutionalised theatre and so we can create something new and expand our views on theatre. When I manage to become a partner for an actor that means a lot to me. I must say I do value the team I have, their support and dedication. It is no hollow phrase, rather a valuable knowledge. 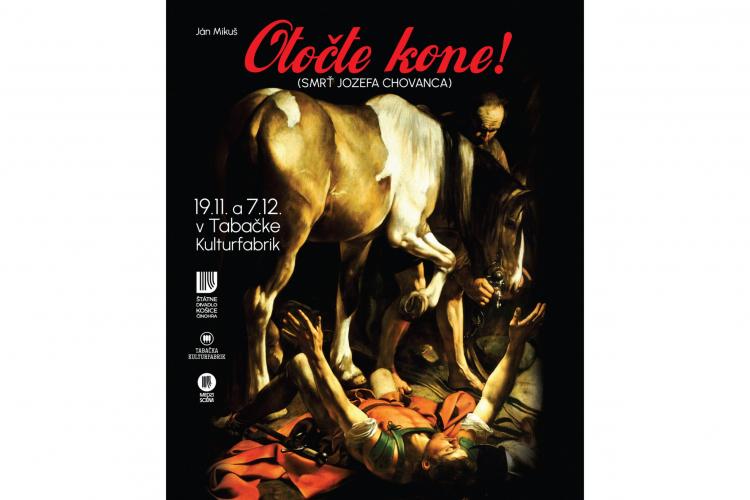 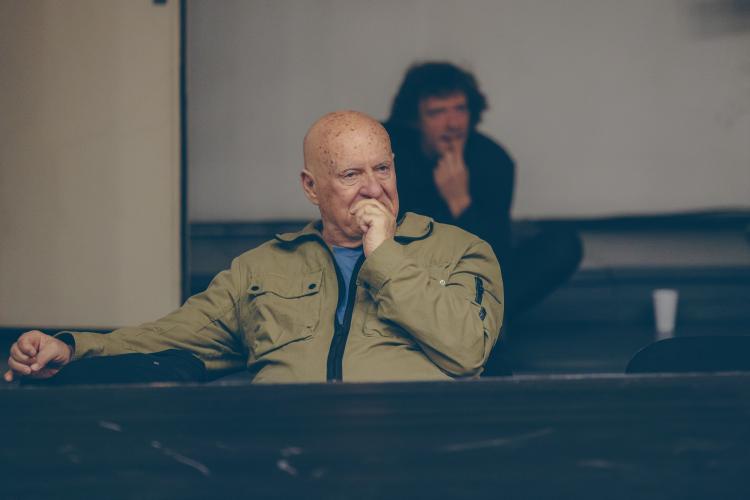 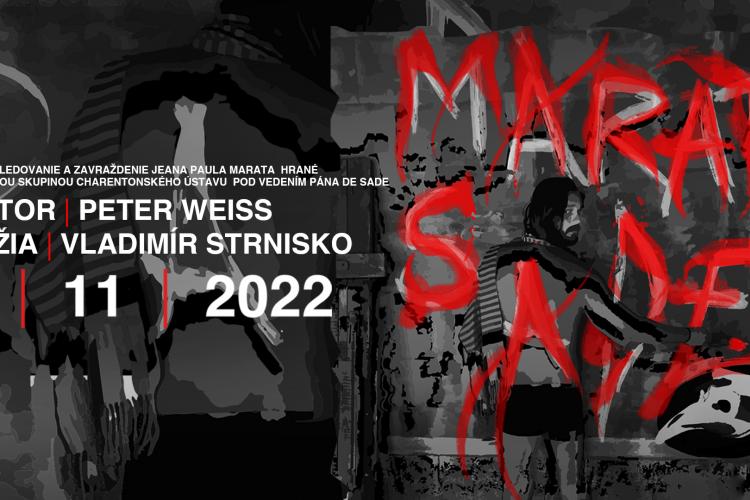 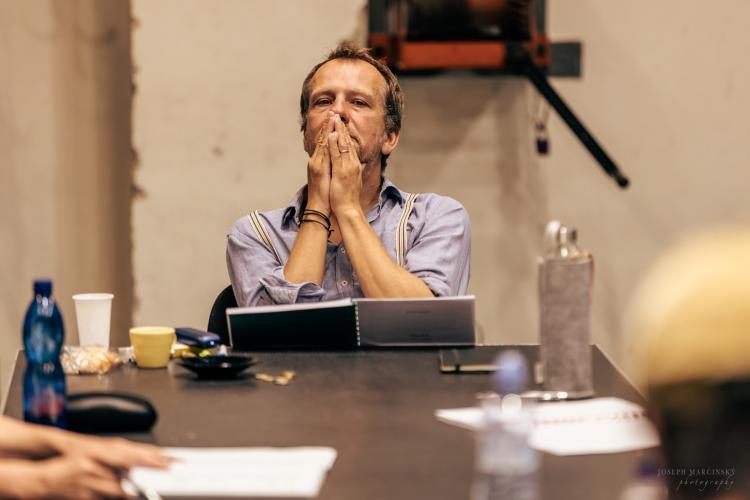 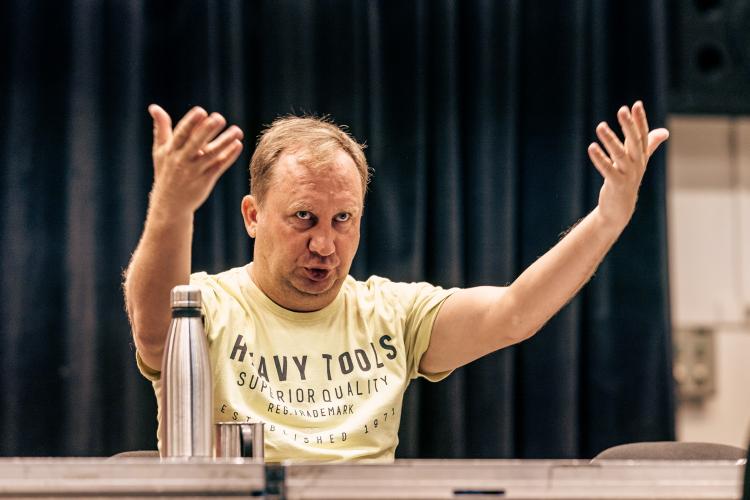