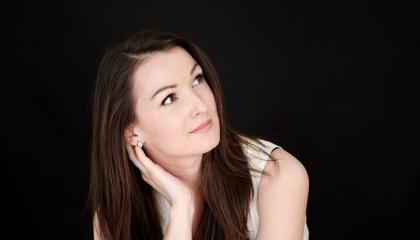 Another unique project by the Opera Company of the State Theatre Košice. It is planned for the second half of November. On Saturday, November 20th, the Opera Company presents Symphony No. 3 by Polish composer Henryk Górecki. The musical work has become one of the greatest hits of modern classic music of the last decade of the past century. The rising star of Slovak and world opera, soprano Slávka Zámečníková, performs the solo part. The unique piece of music has been prepared by the chief conductor Peter Valentovič and the orchestra of the Opera Company.

In 1977, when they played Symphony No. 3 - Symphony of Sorrowful Songs by Henryk Górecki (1933 - 2010) for the first time at the festival in French Royane, nobody seemed to take a special note of this remarkable work. It gained a lukewarm reception by critiques; even it was described as tonal and hence retrogressive. In 1993, however, a CD record of the work appeared on the list of greatest hits in the Great Britain; it was interpreted by American soprano Dawn Upshaw and conducted by David Zinman. In USA, the work has dominated the greatest hits of classic music for 38 weeks. They sold in total more than million CDs. "People probably found something they needed in the symphony – I may have discovered for them something that was once lost", said Henryk Górecki after worldwide success of his symphony.

What caused this huge, unprecedented interest in this modern piece of classic music? "Is it its simplicity and spiritual depth, unusual warmth and light we feel from the composition despite the sorrowful theme of the songs. In Part I, Górecki put to music psalm 'Mary over her son'. The psalm comes from the 15th century monastery. In Part II, we see an inscription from Gestapo cell in Zakopane turned into music, and in Part III, a Silesian folk song, from the period of Polish uprisings, that describes a deep sorrow of a mother over a son who died in war", says Roland Khern-Tóth, Opera Director ŠDKE.

The premiere of Górecki’s Symphony No. 3 will be the first performance by the soloist of The Vienna State Opera Slávka Zámečníková on stage of the State Theatre Košice. Young soprano experienced a rocket start to world opera and concert stages. Today, she is one of the greatest opera talents. From September 2020, she is a member of permanent ensemble of The Vienna State Opera where she made her debut with great success yet in her first season, interpreting famous roles. Her portrayal of Poppea in Monteverdi’s The Coronation of Poppea was exceptional. As a holder of Liz Mohn Kultur - und Musikstiftung Scholarship, during her studies in 2017 to 2019, she performed in several opera productions in Berliner Staatsoper. She did Sophie successfully in Massenet’s Werther in the National Theatre in Prague.

Slávka Zámečníková has performed at many international opera and concert stages. At Prague Spring 2018, she did Symphony No. 4 with The Warsaw Philharmonics, conducted by Simon Rattle. She debuted in Hamburg Elbphilharmonie as Chasseresse (Hippolyte et Aricie). She also performed at leading German festivals Rheingau Musik Festival and Mecklenburg-Vorpommern Festspiele. She did Mozart’s Requiem at Galina Vishnevskaya Opera Festival in Sochi. At Internationale Maifestspiele 2019, she debuted as Ilia (Idomeneo) in Hessisches Staatstheater Wiesbaden.